In previous posts on Ferneyhough’s music, I describe my approach to his complex rhythms. It is worth noting again that his music is not pulse based; rather, the measure is considered a “domain of a certain energy quotient”.

In Cassandra’s Dream Song we are presented with freedom from measures, time signatures, or metronome markings. The Italian indications often refer to character more than actual speed: lento analitico, grazioso e rubato, molto rigoroso. So how fast do we play it? I can give no answers, but hopefully my ideas can give a clue as to what may work for you.

If you carefully sketch the rhythm of a passage, the spatial relationships become apparent. Here is a very old sketch I did of line 6. I attempted to make measures out of the gestures – an idea I later abandoned in favor of pure spatiality:

Personally, I find this line is often performed too fast. I am guilty of this as well. Who doesn’t get excited by those closely-written, many-beamed tuplets at the end? But if you look carefully, I believe there is a compositional reason for those multi-beams. The beginning of the line has a sort of quarter-note feel to it. Under the first heavy arrow (indicating ritardando),  the eigth-note becomes the rhythmical basis of movement (see, I try to avoid the word “pulse”, but maybe I am being too pedantic). By the A-natural things have slowed way down: lento molto con forza! (Composer’s exclamation point). That is one very long note, relatively speaking. By this time, like a compositional microscope, the rhythmical basis has magnified to the level of the 16th note. And then there is another ritardando! (The heavy arrow). It is as if we are being drawn even further through the lens of this microscope, experiencing progressively smaller units of the beat as time proceeds. Finally, we come down to the “atomic” level of the piece. It is an amazing ending.

After analyzing several lines like this, I abandoned the idea of imposing measures and transferred  the sketches to graph paper in order to see the accuracy of spacing as clearly as possible. Here is an example of line 4:

I did all this work not only to have a chance of playing the rhythms accurately, but as a crucial step in deciding: how fast? You have to find which notes are really the fastest (sometimes not the ones that look the fastest), and go from there. How fast you play will be an individual decision. I am not convinced there is a global metronome marking that works for the entire piece, but maybe someone else has another opinion. I do think the flow should be consistent within an individual line – with close attention if there are indications of change.

In this entry, I present these sketches so that if you are interested in the piece, you can have a go at it yourself. The rest of the sketches are too large and lightly written to scan well. Please don’t ask me to scan or photograph the rest and post them (and not every line has been analyzed). However, I am happy to show them in person.

Below is some advice for works by composers (such as Brian Ferneyhough) who use complex rhythms not based on pulse-centered activity. I spoke with Mr. Ferneyhough about this subject and he was very clear that in his music, the measure is a “domain of a certain energy quotient” not related to a pulse.

In other words, a measure can be interpreted as an “area of activity”. The level of activity can easily be reckoned using the starting tempo. From there we can calculate the length of any measure or individual note through simple mathematics.

So if the rhythm cannot be felt as a pulse, one can at least memorize the speed in which it is supposed to happen. Surprisingly, it’s sometimes much slower than one thinks!

Ferneyhough’s Superscriptio for solo piccolo is a good example. The basic tempo is an eighth-note at 56. This means a whole note in 4/4 equals 7, because there are 8 eighth notes in a 4/4 bar, and 8 divided by 56 = 7.

What if the compound rhythms are stacked on top of each other, as in Ferneyhough’s other works? This is an imaginary example:

Let’s imagine as in Superscriptio the starting tempo is an eighth-note at 56. The last six 16ths (at the end of the bar) roughly equal two 16th-note triplets at 64. The nine 32nds under the 9:5 are roughly equal to three sets of 32nd triplets going at 116.

It could have been notated thus (among other possibilities):

A click track will ensure accuracy without a doubt. However, if you opt for another approach, try the following: memorize the speed of each bar by practicing related bars together. Keeping Superscriptio as an example, you can practice all the bars based on “1/12” while keeping the metronome at tempo 84. (Yes, you will be jumping from measure to measure, or page to page.) Then do the same for all the “1/10” bars, then “1/8” etc. You are not trying to achieve musical continuity yet, this is just an exercise to help relate all the bars with this tempo, and to keep them consistent. When you finally put the piece together, your “internal conductor” will hopefully have a kinesthetic memory of the pulse of each measure and make the tempo changes accordingly.

Also see my post Seminar with Brian Ferneyhough.
Other thoughts? 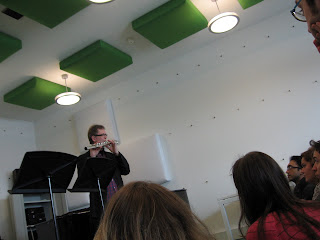 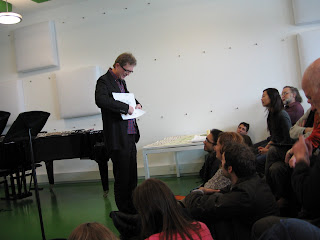 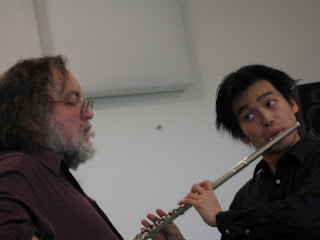 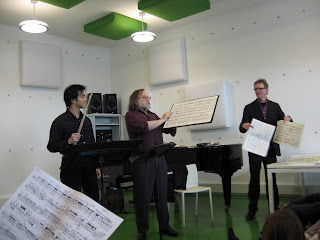 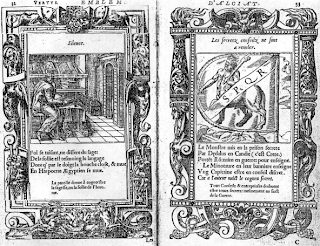