Hey Folks,
it’s been awhile, but now that I have re-couped from early summer projects it’s time for a retrospective. 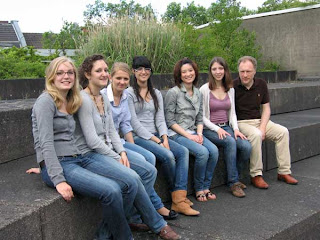 June 18th was a busy day. In preparation for an article for Pan, I visited the Hochschule here in Cologne. What a creepy place! Lovely naked concrete 80’s architecture. Anyway, that aside, had a very interesting 3 hours with Prof. Robert Winn and his students. He gave many salient points that I will need to sift through before airing them to the British flute-loving public. And sorry, I’m not at liberty to give anything away before publication!

Later that day I pedaled over to Cologne’s Loft – which as some of you may know is the venue for improvised music. God Bless Hans-Martin Müller for founding it!

My duo partner Alexei Lapin (Lyosha) from St. Petersburg had just arrived and we were ready for his German debut. For the concert I rounded
up Melvyn Poore, tuba – 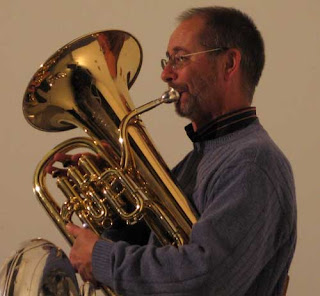 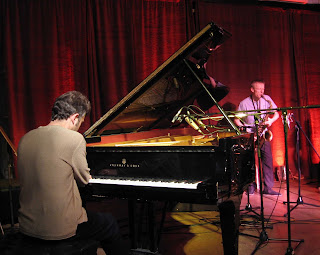 and at the last minute Roger Turner, drums. 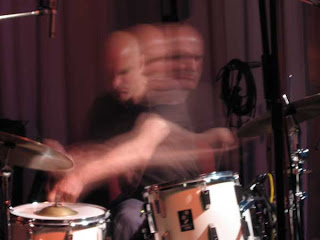 I got roped into playing as well for the second set. We had a small audience, but all in all it wasn’t bad. There were also some good moments. And if we get the recording mastered well, we just might be able to put it out on CD.

June 20 I arranged for Llyosha to do a jam/recording session at the musikFabrik with Frank Gratkowski sax/clarinet and Sebastian Gramss bass. I think those guys played very well together, and I learned a lot.

June 26-27 I headed up to Hannover to record at the EMI Emil Berliner Studios. Jüri Reinvere had arranged for us to record his Requiem for flute, 4 male voices and female voice-over. We met the singers who flew straight in from Tallinn to the rehearsal. I was treated with a flood of Estonian words, and temporarily even learned to count in Estonian. It’s all long-gone the way all my short-term learning goes.

June 29 I went north again, this time to Münster to do the German premiere of this Requiem. This was shown with film footage of Estonia from before the wars. We played in the Apostelkirche, quite nice but with acoustics too-churchy for this piece. It went OK, but the audience (a bigger turnout than I expected) response was underwhelming. Too bad, I like this piece. One we got the notation sorted out (subject for another blog entry) it went very fine – excellent writing for flute. The combination with male voices is very soulful.

July 2-3 was busy with rehearsals for Royaumont with musikFabrik. Also with film. Very tricky stuff that needs to be coordinated with click-track. These are all new works by Michael Jarrell, Martin Matalon and Paul Cendo. Am looking forward to August in Royamount with lovely food and the beautiful Cistercian chapel where we will play. These Cistercian cathedrals and churches are my absolute favorite, no peeing putties or horrible bleeding cross paintings, just light, light, more light and beautiful stonework.

July 5 was my solo concert which took place in an absolute sauna of light, speaking of…..
After the first two works it didn’t go too badly. The concert got off to such a bad start – and I think I have the answer (also another blog subject). In short, I ignored my physical well-being again. On the whole, the turnout was better than I expected, the organizer was happy, and the whole thing will be available for purchase/download in the Fall. More on that later.

Now coming up:
July 15 in St. Petersburg at the GEZ with Llosha and Nikolai Rubanov, sax. I’ve been humbled though and am a bit shy now of this improv stuff. I’ve heard so many really good people recently that I’m inspired and ashamed (of my own piddling attempts) at the same time.

Then it’s family time! There will be 2 sets of grandparents for my little boy to drool on. We are all looking forward to it. Maybe I’ll even have time to blog….. 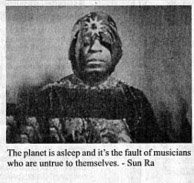 Here’s the caption in bigger letters:
The planet is asleep and it’s the fault of musicians
who are untrue to themselves. – Sun Ra

I had this conversation with a student of mine who just graduated. It’s a tough situation for her: suddenly no stimulus of fellow students, no schedule to follow, lack of money, and pressure of entrance auditions for the next degree. As a foreigner, she has no support system and must provide her own stability and motivation. The result of this is mild depression and reculsiveness. So my pep talk to her included the phrase:”Inspiration doesn’t come knocking at the door, you have to get out and find it”!

I don’t know to what extent this is true. And I don’t think it helped, but we’ll see how she does this month with the auditions.

It is however good that I remember these words for myself. As I mentioned in my last post, my husband needed to kick me out the door to attend a concert of “Plush Music Festival” at the Loft. I’ve been house bound except for the necessary teaching, meetings etc. Missing many good concerts. It was time for some inspiration and I found it! Last night’s concert opened with Simon Nabatov (piano) playing Herbie Nichols. Boy does he rock! And I am sad I don’t play a harmony instrument – what lushness…. And power – the sheer volume of it, but never harsh or grating. On the flip side, the second set featured Hayden Chisholm and his quartet playing original works. I’ve never heard a sax player play so sustainedly quiet. What subtlety and color!

When you leave a concert thinking: “oh dear, I’ve got a lot to learn”, I think you can say it was worthwhile.