Bottom of the Food Chain

Wondering why I haven’t posted recently? This is where I have been all week! At the bottom of the food chain! OK, maybe I exaggerate. Maybe more like a pawn on the chessboard of pieces where composers, conductors, organizers, managers are the big players. We play what sells, and ideas sell, beautiful packaging sells, regardless of the quality that is inside.

I’ve worked with more living composers than you can shake a stick at. In today’s European Contemporary Music Scene, a handful of lucky composers are the stars, not the ensemble or orchestral musicians who play their music. These chosen few (composers) are promoted by organizers of festivals and the big publishing companies (who act as their agents as well). If you have a performance scheduled and receive a dud or embarrassing piece from one of them, or a piece that comes too late and is impossible to play: tough luck. It is your job to get it done and make it sound good. Cancelling a piece is politically incorrect, or would cause a scandal. The programs have been printed. The VIPs have been invited. The deals have been made. Money has changed hands. You are the sissy if you complain or can’t pull it off. Besides, you have a family to feed, and can’t afford to forgo your share of the money (minuscule as it may be).

A question was posed recently on the Flute List: does one have a moral obligation to fulfill a composer’s intentions? I’d like to turn it around. Does a composer have similar moral obligations? Heck, does he even have a professional obligation when it comes to fulfilling a commission? It would seem not. More often than not, we find ourselves in a situation where a quality rendering of the premiere piece is severely compromised: too late, not for the instrumentation specified, unreadable manuscript, or unexplained, unclear notation. [I’m not talking about student workshops, I’m talking about well known composers who (even sadder) have teaching positions and are influencing the young generation.] Do we still pay the commission fee under such circumstances? Yes. We’re nice, we’re professionals, we’re capable. We’re pioneers, we can take anything anyone throws at us. Ahem.

Still, I’m a big fan of composers, even tardy ones. I support contemporary music and all its endeavours: big, small, loud, quiet, beautiful, ugly, complex, minimalistic. For all my b–ing I am happy to be doing what I am. So now I will speak of me/us/performers and our obligations, moral or otherwise to the composer’s intentions.

I’ll confine myself to 20th century and later composers – earlier music is another whole can of worms. I’ll be honest. There are a few composers whom I dread to play. I see them coming up on a program and think: “well, I’ll just go get my strait-jacket.” These are the ones that require slavish following of their notation, no deviations allowed. Dang. I got into contemporary music because I consider myself a bit of a deviant. If I wanted to slavishly follow someone I could make a heck of a lot more money in an orchestra somewhere. [OK, I know it’s not that bad in most orchestras! But you have to be darned lucky.]

Here’s an example, though, of where this somewhat adolescent attitude of mine proved to be misplaced. I used to consider Karlheinz Stockhausen one of these dreaded composers. Working with him closely on the premiere of his Rotary Quintet gave me another perspective.

For the premiere of this work he wanted to underscore the difference between male and female (This quintet is part of his Licht cycle). So he asked us to reflect this gender difference in our concert-wear. With some trepidation, and gentle respect, I objected on the grounds that as a musician, I don’t consider my gender, and my native English also reflects no differences of gender. To my utter astonishment, he readily conceded, in a very gentlemanly fashion. 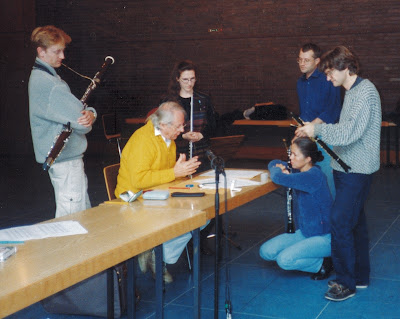 
Now I am starting preparations for the flute solo Paradies from Klang, which we plan to premiere in its (all 21 hours) entirety. This has me looking back on those days 12 years ago. Stockhausen is no longer around to gently concede to my cultural baggage, so I will not have the chance to thwart his intentions in person, but would I want to? It would just seem disrespectful at this point. Besides, I look back on my objections of 12 years ago and find them a bit silly. Americans are so gung-ho gender blind, but I don’t think females do any better there than in Europe. In Europe it feels more realistic: nobody tries to pretend that men and women are alike.