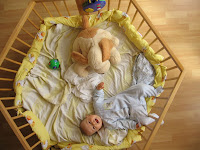 Here I am just keeping tabs on myself again. I’m into the home stretch of preparations for my first solo concerts (not solo appearances, by the way) after the birth of Nikolai, Sept. 14, 2008.

Now is the time to appreciate all the energy that goes into the preparation of a solo flute concert. Just being able to play the pieces is enough work (could spend a lifetime on that….). But I need to get in physical shape. I know the pieces, and my lips are in shape but as I ran through a few pieces today I realized I need more strength. That is going to be the hard work. Then there is the publicity, photos, program notes…. (sigh…)

Lactation takes some of your energy away. And recovery from a c-section, major abdominal surgery, takes its time. (I don’t know why anyone would elect to have one, if not medically necessary. You are in pain for much longer than a normal labor – not at the time perhaps, but afterwards when you need to be working and up and about. No fun for flutists!) So in addition to my lackadaisical yoga routine, my occasional walking and biking I need to get my butt moving.

So enough whinging. Here’s what’s on:

June 29th, the German premiere of Jüri Reinvere’s Requiem for solo flute, 6 voices and video. This 50 – minute work will be performed during the week celebrating Estonian Culture in Münster, Germany.
The concert will be at 20.00 hours at the Apostelkirche. The work is, how shall I describe, “post Sciarrino”. Many lovely quiet sounds, very poetic. I really enjoyed working with the composer, making some discoveries and clarifying some elements of extended techniques. However, the composer, and Richard Craig (who did the World Premiere) and I are still scratching our heads over how to notate the last movement. Notation remains the bug-bear and bane of contemporary music.