When I came across the entry for Karlheinz Stockhausen in Andras Adorjan’s Lexicon der Flöte (Page 754), the elements of this blog entry started brewing. Let’s see if I can form a coherent thought or two. First of all, here is the German text: 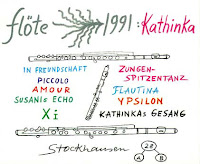 This entry was probably written in English and translated to German. It may be that the author of this entry was misunderstood; perhaps an infelicity of translation into German rendered the words not exactly as he intended. If my observations are based on such a misunderstanding, I offer my apologies.

Since I have not come across the English original, I offer a crude translation of my own:

Towards the end of the 1970s his [Stockhausen’s] music was performed more and more by his family and close friends, the flute music primarily by Kathinka Pasveer (*1959), which rather hindered the propagation, (or circulation, or diffusion) of his music. One hopes however, that such important works as […] will receive their due appreciation and listeners.

For decades, many of Stockhausen’s close family and friends have done their utmost to make Stockhausen’s music accessible to the public and to performers. To blandly blame the music’s lack of widespread circulation on the fact that it was performed by (and written for) them does them a huge disservice. The fact that it is accessible at all is thanks to the family and friends of Stockhausen. Since 1998, the Stockhausen Courses in Kürten have been run by Kathinka Pasveer and Susanne Stevens, in order to bring more musicians and public to Stockhausen’s music. Furthermore, since his death, they run the Stockhausen Foundation, which puts its money where its mouth is, offering board and lodging for musicians and musicologists who are studying Stockhausen’s works.

Who am I to comment on this? I am not a member of Stockhausen’s circle, and although I have great respect for him as a composer, and have enjoyed working with him and Kathinka Pasveer, his late works are not exactly my cup of tea. However, as a member of a soloist ensemble which counts Stockhausen as one of its local composers, I am in a position to view this matter with, I hope, some objectivity.

Speaking of objectivity, I am surprised that this entry on Stockhausen was allowed to be printed in a lexicon. A lexicon, or dictionary, lists facts and lets the readers draw their own conclusions.

The author does make a true point about our repertoire. For flutists, none of Stockhausen’s works are as prominent in the 20th century repertoire as the Berio Sequenza, Density 21.5 by Varese, Debussy’s Syrinx, Takemitsu’s Voice or Carter’s Scrivo in Vento. (This is my personal top 5 list of Contemporary works that every advanced student should know.) What is it about Stockhausen’s music that keeps it from being at the top of repertoire lists?

The most obvious elements are the requirement of memorization and the theatrical elements that some works require.  Amour, In Freundschaft, and Zungenspitzentanz are probably the least effort in this respect. Kathinka’s Gesang on the other hand requires a huge commitment of time and energy. 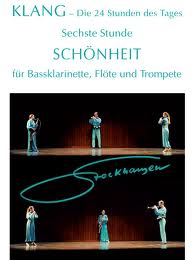 Is the fact Stockhausen wrote these works for a member of his close circle that which hinders their circulation among the general public? Not as I see it. Here is not the place for a lengthy discourse on Stockhausen’s aesthetics. But I can say this: his aesthetics are his very own, derived from his work with electronic music, ideas from the Urantia Book, and  the concept of all music as “opera” (having an inescapable visual aspect). His aesthetic has been called Fremde Schönheit or Strange Beauty. These are the highest hurdles to Stockhausen’s popularity among performers. His music is not for the faint of heart.

The family members and close friends with whom he worked saw to it that his music could be executed on their instruments, and did not make compositional or aesthetic decisions. They have done their jobs well; everything in a work by Stockhausen is playable and clearly notated. In contrast, how many of us contemporary flutists have scratched our heads nearly bald trying to work out a piece written for a famous flutist of our day who didn’t sweat the details of clarity of notation? I certainly have had my share of them, that is why I take the trouble to write this blog in the first place.

One response to “Stockhausen in Adorjan’s Lexicon”