Bring in the Clones 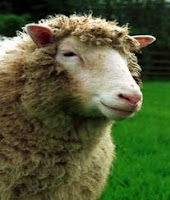 Read an interview by almost any famous flute teacher today from our Western culture and you will notice they share similar ideals. The development of a student’s individuality is given high priority. Their students are encouraged to find their own musical identities; they don’t want clones or sound-alikes.

Nor do I. But what I’m about to say will at first seem like a contradiction. I am aware that I am in a different position than the stellar players and teachers of our time. I don’t have a bunch of sycophants and wannabees trailing in my wake. Therefore, I can enjoy a bit of skepticism in the face of this idealistic individualism.

Peter Lloyd, with whom I studied for 4 years, shared this ideal, and took it to an extreme. Even when he was still playing (as he was when I studied with him 1988 – 1992), he would not play for us in lessons. He didn’t want us sounding like him. I asked him why not, since we came out of our lessons talking like him (joking, of course. He has a great posh accent.) His reply: “Good, you’re finally learning to speak properly!” This humor as well as his patience saved me, nurturing and bringing back to life what was left of me after my dismal undergraduate years. I have much thank him for. However, since I was so good at hiding my real problems, my playing still left much to be desired when I left Indiana. And I still didn’t have a clue who I was as a musician. I was too confused to even have a clear ideal of sound, I wanted to sound French, but with American verve, and English full-bodiedness. One thing was clear, I was sure I could find it by following the Contemporary Music path, not the Early Music or orchestral path. Perhaps I sympathized with late 20th century Modernism; it was striving to find itself as much as I was.

That path led to Amsterdam, where I studied flute with  Harrie Starreveld and classical South Indian music with Rafael Reina and Jahnavi Jayaprakash. Harrie does not have any particular philosophy regarding playing in lessons, but most of what I learned came from listening to him and playing with him, often in an apprentice-type situation with the Nieuw Ensemble. That is what it took for me. No one would even say that I sound at all like Harrie: I don’t, but I cannot stress how much this experience helped me to find my voice.

Four years after my studies with Harrie I went to India for two and a half weeks to work with Jahnavi Jayaprakash privately in Bangalore, and the scales seemed to fall from my eyes. I wondered if our Western musical education was not entirely bass-ackwards. Everything we learn seems to be from the top down, instead of the bottom up. In India, the idea that you can learn music by verbal explanation only and hope to develop a musical spirit in a vacuum of abstract ideas is ludicrous. That one can study without the rote learning which frees one technically and enables inspiration to soar – also ridiculous!

But rote learning is BAD, a well-known European flute teacher told me recently. I’m tending to disagree. Rote learning without any understanding at all is bad, but I think we tend to throw the baby out with the bath water.

Indian classical music education does not eschew the technical, analytical or theoretical, but as I understand, it comes when one has already mastered one’s voice or instrument. My teacher Jahnavi had her Doctorate from an Indian University in music and could explain the intricacies of each nuance of a Raga for Westerners like me. But that was not how she normally taught. Mastering music means learning the language of music and all its subtleties not only through the intellect, but through the ear and the heart, by method of imitation. It is a somatic as well as an intellectual process. The great diversity among South Indian flute players is a living testament to individuality despite the massive rote learning and imitative method of their studies.

This is not a “grass is greener” essay. I don’t think if I had learned the Indian way from the beginning it would have completely solved all my problems. I do enjoy analysis, and was good at theory, and was glad to learn it young. But I do wish I had had someone to sonically follow in my earliest years.

Teacher: “Could you play that more legato?”

Having someone to just play for me might have avoided crisis and saved me a lot of time, but maybe I was destined to have such a long and hurdle-ridden path. For many young players today this from-the-top-down musical education is less of a problem, thanks to the proliferation of Suzuki teachers. I am speaking only on behalf of those like myself, who come from the traditional marching- or wind-band school education.

I do not want my students to slavishly follow me, and I certainly don’t wish my bad habits on them. However, I do play for them whenever possible, and expect them to strive to my standards, and higher. There is of course the danger that my students might superficially sound like me, but I am fully convinced they will get over it.

4 responses to “Bring in the Clones”