Non vibrato and the Book of Disquiet 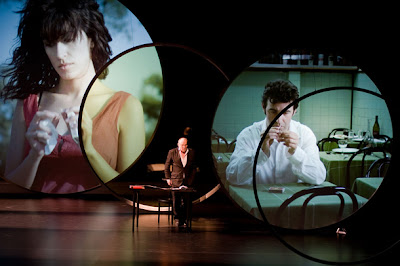 On the first of August this year (2010) I had the privilege of performing Michel van der Aa’s “Book of Disquiet” , a multi-media work based on texts of Fernando Pessoa’s “factless autobiography”. We even shared the stage with Klaus-Maria Brandauer , who gave a powerful if impulsive performance. In addition, since this was a film festival and not a hole-in-the-wall contemporary music festival, we were put up in a 5 star hotel and had our concert in the stunning opera house in Wroclaw. Every once in a while, the perks percolate to our level!

I wanted to use this as a platform for my thoughts about non vibrato, because, well, playing without vibrato for many flutists is a disquieting prospect. It is no longer a novel concept – the Early Music movement has seen to that. However, I’ve run across a number of contemporary composers who use it as their esthetic, not only for flutists, but for the whole ensemble. It was also the contemporary music trend for ensembles in the 20th century, especially in the Netherlands. I’m not sure if Michel van der Aa is an heir to this tradition, or if his non-vibrato esthetic stems from the sound world of electronically produced sounds.

In any case, the challenge for me was to blend with three violins (also playing non vibrato) and with the other winds (clarinet, bassoon and trumpet). The violins and the flute are often in unison in the high register. No place to hide. The other challenge was the transparency of texture – this is music that has to sound, hmm, nice, for lack of a better word. Not pretty or sugary, but clear and listen-to-able. When a flutist thinks of sounding nice, they will add a shimmer or shine to the sound (i.e. vibrato), just as a person naturally smiles when trying to be nice. Vibrato is our smile, so to say. Without it, we are in danger of a death-like grimace.

I encounter this mortal danger in my studio, too. My students are pretty well behaved when it comes to preparing Baroque pieces. They do their homework, listen to traverso recordings, read Quantz, and sometimes dutifully stifle their vibrato. Stifle. That is the initial reaction to non vibrato. The sound is dead and flat, not only in intonation but in color. What is the trick to playing with a good, healthy, in-tune sound without vibrato? The dilemma of disquiet.

Now, the question of whether one should play Baroque music without vibrato on modern flute is a separate one. My answer to that is: one should played with a modified vibrato (which includes the possibility of non vibrato). If one is performing with a modern piano, I downright discourage complete non vibrato. (read why here)

To avoid death and poor intonation while playing non vibrato

Easier said than done. I’m all ears for other ideas.

2 responses to “Non vibrato and the Book of Disquiet”