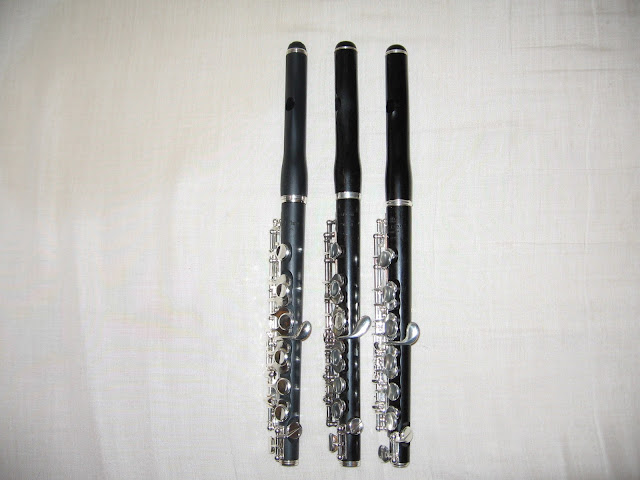 Here’s a comparison photo of three piccolos: (left) a Pearl Grenadite, (center) a Philipp Hammig with an August Richard Hammig headjoint, and (right) an Anton Braun.

The photo is pretty bad and overexposed, but you can see the difference in length and taper. Notice that although each piccolo was built to A= 442 specs, that the Braun is shorter and much more tapered at the end. Does anyone have an explanation for that?

I spent years trying to decide whether to spend over 5,000 Euros for a Braun piccolo. The Hammig hybrid I had been playing on is a very good instrument, but I often play in situations where I needed to play louder. People roll their eyes when I tell them that, but the piccolo is not always a deafening beast. In the low and middle registers, especially articulated passages, I was often struggling to project. It doesn’t help that those registers are used often with E-flat clarinet, trumpet or percussion with hard mallets. Some composers seem to think that the piccolo will always dominate. However, it’s only the third octave that really penetrates. (Then you get the composers who think you can match a pianissimo third octave note with a violin playing the same dynamic. NOT.)

I spoke about my dynamic and articulation problems in the middle and low register with Patricia Morris. She asked me what kind of piccolo I had. When I said Hammig, she said that’s likely the problem. Then she allowed me to try her Braun piccolos and I could feel the difference. I could certainly have continued with my Hammig, but we now have a concert series in which our performances are recorded live for CD, warts and all. So I decided to take the plunge. 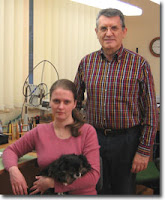 When my piccolo came from Herr Braun (photo left, with daughter Antonia), I asked him for some guidelines to break in, or rather play in the instrument. Everyone has their theory about new wooden instruments. He gives his general guidelines here but added the following information by telephone. He told me to give it a good 4 to 6 weeks to play in. I was bummed about that as I had a Xenakis program with Thallein and Jalons in 2 weeks, but I took his advice to heart. He said to start with the low register for the first week or so, then move to the middle and only then up to the high register. He said to not let anyone else play it (of course someone trying the piccolo for a few minutes is ok), that the instrument needed to get used to the way I blow on it. And most importantly he said, that I should try to blow more like on the flute than a typical piccolo, that he had made his instruments expressly so, that they could be played more flute-like. It should be a quite relaxed approach. By the way, if you can read German, here is his story, it is amazing!

Herr Braun’s advice turns out to be crucial because the instrument can easily go sharp. I expected trouble as I played on my own with a tuner, but when I got with the ensemble, I was so happy that I could just blow and relax, and not have to reach up for any of the notes. I play pulled out a few millimeters. In short, this is a completely different animal from the Hammig! I am liking it very much, though.

I’ll put in a good word also for the Hammig and the Pearl. For about 9 years I played on the Hammig with a Werner Fischer head. These are very colorful, flexible and light head joints. Easy to play and very dolce. They are good for non picc specialists or specialists for whom projection is not an issue. I then heard the A. R. Hammig was making very good heads, and ordered a grenadilla one. It gave me an improvement in depth for the middle and low register, and I really liked the overall sound. The Pearl grenadite is the best cheap piccolo on the market, in my opinion. I couldn’t believe how well it played compared to Yamaha and the others. For me, anyway.